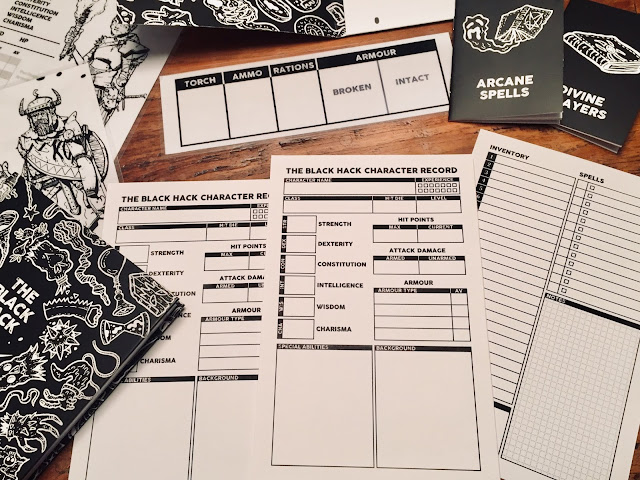 OK so apparently I really like making character sheets.  I've got another one - this time for The Black Hack.


I'm really excited to try out The Black Hack 2nd Edition. What a simple and elegant system. I got the version that comes with the hard back rule book, a soft back rules booklet, a great little GM screen, a couple of neat little spell books for the players - plus a great A5-sized folder with some character sheets inside.  I was really pleased when it came - great quality materials and a great game.  I also really love that everything is covered with great illustrations by skullfungus.

I like the sheets that came in the folder - they're of top-notch quality like everything else in the set. After mulling it over, though, I decided I wanted to make a version on two sides with a little more room for the players to spread out their notes and information and still preserve the simplicity and small form-factor of the original.

If anyone wants to use it, it's at the link below. It's a two-page pdf with two sheets on it, meant to be printed on both sides and then cut in half.  I printed mine on cardstock to mimic the sheets that came with the original set.  They're not exactly A5 once you cut them, but they fit in the folder fine.


I also made a one-sided full sheet version for those that prefer that.

I also made a little mat so the players would have a special place to put their usage dice (and also serve as a reminder of their dwindling resources).  It's a one-page pdf that has four mats on it.  I got mine laminated but they should work fine as simple printouts too.  It's at the link below.

November 17, 2018
Lately I've been pretty obsessed with Into the Odd  by Chris McDowall .
3 comments
Read more